Bond, Felix, and Quarrel Jr. take the fight back to San Monique to destroy Kananga’s operation and rescue Solitaire. Bond trades his usual PPK for a Smith and wesson magnum revolver, and decides to be a bit stealthy, wearing  an all-black suit. Among it’s many callbacks to other Bond films, Bond’s suit in this movie seems to be reference in the SPECTRE poster (although the outfit he wears in the film is a bit different)

Here, Solitarire is bound and about to be sacrificed to a poisonous snake like Baines earlier in the film, in a scene you’d probably expect to see in a King Kong film, not in a Bond film.

However, Bond withdraws his shot when the snake ritual abruptly switches to another thing, Baron Semedi, rising from his “grave”. What follows is pretty weird, as Bond opens fire on Samedi and the revelers; killing the snake man and apparently hitting Samedi too, but it turns out to be perhaps a wooden dummy. However, before it collapses, it’s eyes roll up, which is kind of weird.

After Bond saves Solitare, Semedi (the real one?) emerges from his grave again, and challenges Bond to a machete fight, as Bond has just used up his ammo already.

Quess he didn’t follow his own advice years before…”That’s a smith and wesson, and you’ve had your six.”

Bond manages to knock Semedi into a casket of snakes, where they bite and poison him to death…or do they? and uses the Baron’s grave to gain access to Kananga’s underground base. Kananga seems a bit more genial here, much more upbeat and less angry than his earlier appearances in the film. Here, he takes Bond’s other weapon-a shark gun that shoots compressed air bullets (presumably if Bond needed to swim his way out?) which he then gleefully uses on a couch. 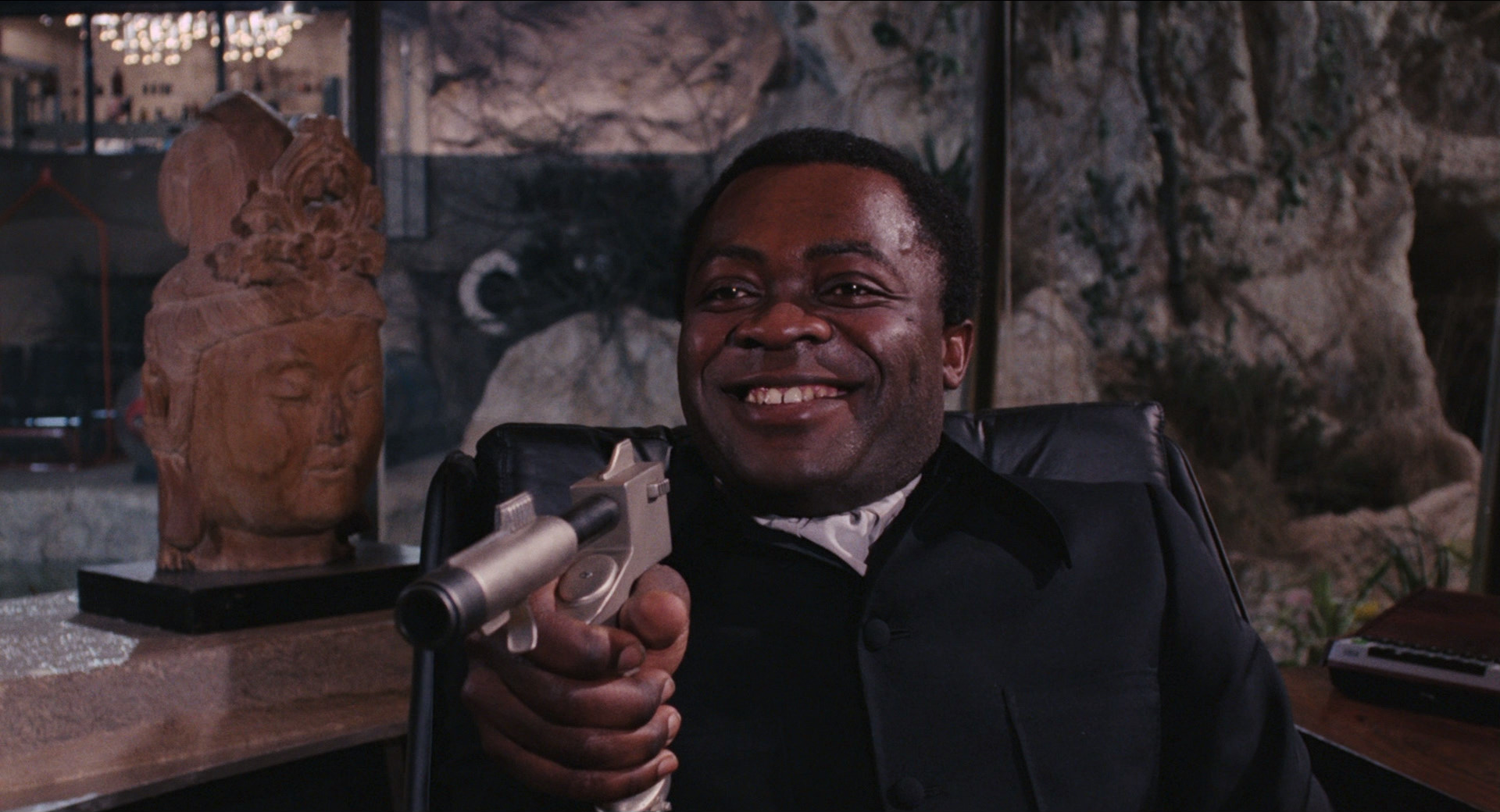 Kananga says that the explosives which have now destroyed the poppy fields have only damaged part of his operations, and that he can rebuild easily with Bond out of the way. As Felix makes another ironic quote about Bond getting ‘tied up’, Bond in fact does get tied up, over a pool of sharks-and with Kananga cutting his arm so it’ll attract sharks.

Parodied of course later on in “Austin Powers…”

But like Austin later on with his floss, Bond’s got a little dues ex machina of his own. Not only does his watch of course function as a magnet-which he uses to get one of the bullets-but the watch also doubles as a small saw!

Escaping and facing Kananga in a brief stand off, Bond manages to overpower him and they both go into the water, where Bond feeds him the bullet. And we’re given perhaps the most ridiculous (and fairly grainy, for some reason) death in the series, as he pretty much turns into a balloon and bursts (although it’s totally bloodless). 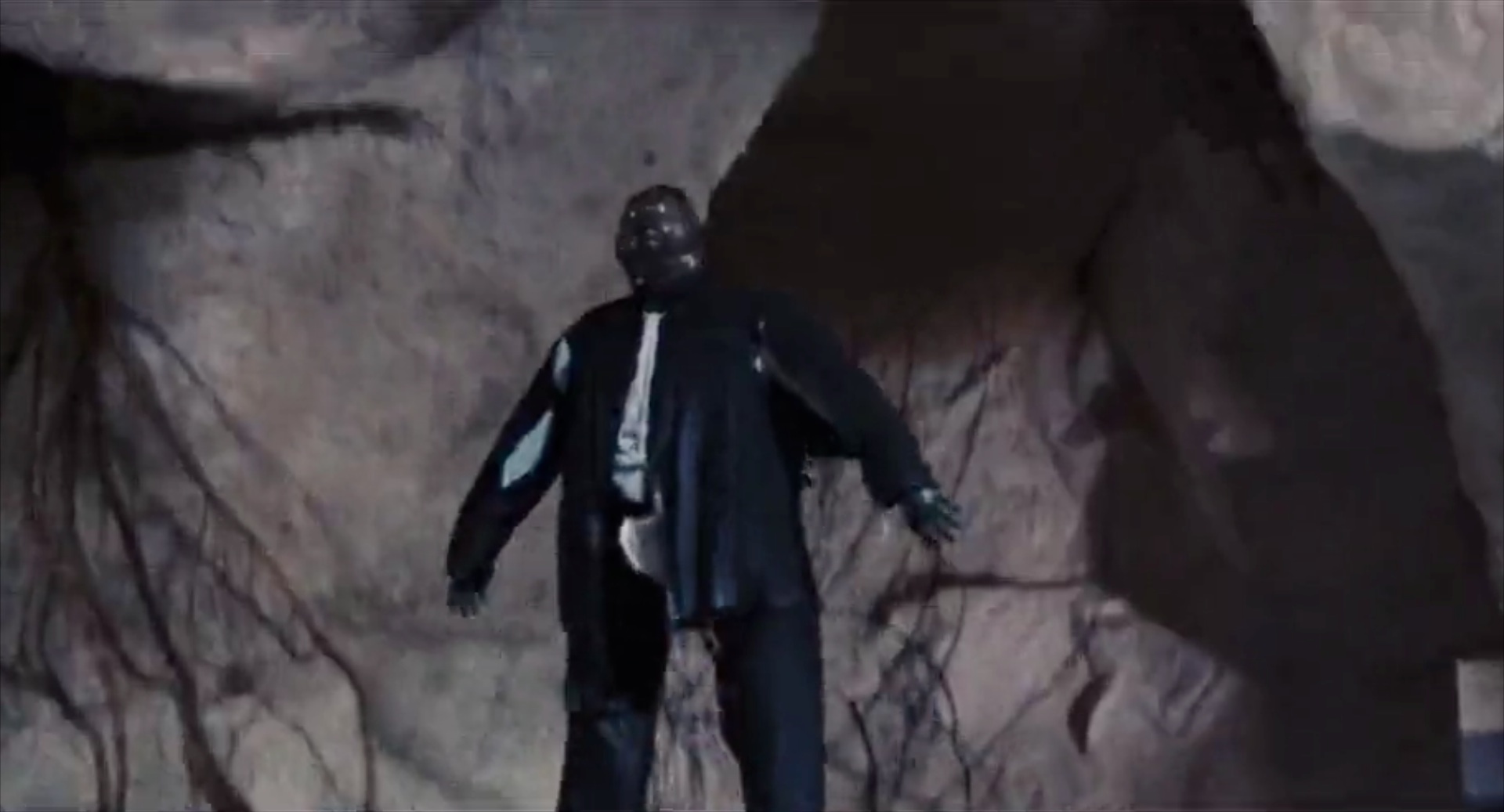 But, like Diamonds Are Forever and the next film, we’re given a post-villain scene where the henchman tries to get revenge. Bond tries to teach Solitare a game of cards (in this case, Gin rummy).

But it turns out Tee-Hee has gotten a ride and wants vengeance for his boss, and so we’re given one of those Bond cliches, the train fight. There’s a brief fight here but Bond quickly manages to damage and jam Tee-Hee’s arm, throwing him-and then his mechanical arm-off the train. We get a kind of double joke here-Solitaire saying “That wasn’t very funny!” since she was stuck in her bed for most of the fight (an unintentional joke to Tee-Hee’s constant giggling) and Bond saying “Just being disarming, darling).

But that’s not it, yet-the final shot of the movie is Baron Semedi on the very front of the train, laughing!

It’s not ever followed up on, of course, unless you count the Goldeneye 64 mission.

Although it’s a bit bizzare in going for the more supernatural than the fantastic, Live and Let Die I feel is a far more polished, good looking, fast-paced and entertaining film than “Diamonds Are Forever”, and easily the strongest of the “Guy Hamilton trilogy” of early 70’s Bond films. Sure, it’s got some silly moments like it’s predecessor, but somehow with Moore it works far better than the usually more serious Connery. It also doesn’t really hit you over the head with it’s location the way “Diamonds” did, and unlike Diamonds-which was mainly stuck in Vegas-feels like more of a globe-trotting adventure, leading perhaps to Bond locations being somewhat more varied in later films (Especially The Spy Who Loved Me, for instance). Although Moore hasn’t quite fit perfectly into the role yet, he comes across far more friendly here than his somewhat more mean-spirited performance in his next film. In addition to the supernatural angle, it also departs in a few other ways from formula, perhaps to distinguish itself more from the Connery films-Bond’s intro for instance quickly getting the briefing out of the way, and in a different setting than M’s office; and of course the total absence of Q.

This kind of ends the “Bond in Review” of the regular Bond films, but at some point I’ll post a review of Connery’s return to the role, in the interesting 1983 Thunderball remake, Never Say Never Again.